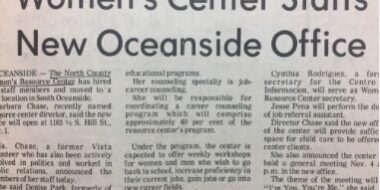 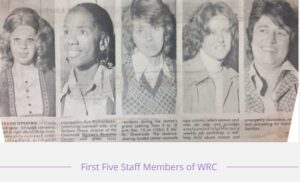 In honor of Women’s History month, WRC would like to highlight the historical foundation of grassroots activism by a multitude of women led groups and organizations in the continual fight to combat violence against women in particular sexual assault and domestic violence. No other socio-political movement within the United States has championed the dismantling of gender stereotypes, traditional power dynamics and gendered violence than the anti-rape movement of the 1970s. The prevalence of activism for social change of the late 1960s and the resurgence of a second-wave of feminism created a catalyst for a movement in which many women who were survivors were able to unite under the banner of combating discrimination against women, ending gendered violence, bringing awareness to the imbalance of power structures in society and how this was wielded often times through sexual violence, and providing substantial legislative reform on a local, state and federal level.

Guided by feminist thought, consciousness-raising groups, and civil rights era public demonstrations, the anti-rape movement and affiliated organizations held events called Speak Outs in the early 1970s in which survivors recounted their experiences. By providing survivors with a platform to speak about the pervasiveness of sexual violence, sexual assault and rape, survivors were able to take control of their healing journeys in which their voices were centered and highlighted. Fueled by the empowerment such events had, many survivors and their allies championed for reform in a legal system that often re-victimized survivors by reinforcing antiquated ideas surrounding rape and survivors of rape. For instance, under common law, marital rape was not recognized nor prosecutable. If a survivor had the foresight or wherewithal to press charges, the burden of proof of rape was upon the survivor. They would need to provide witnesses, proof that they resisted and did not consent, and were oftentimes put under great duress as their personal sexual history was oftentimes dissected and on full display by the defense for jurors to consider in the event the case went to trial. The lack of power, the dehumanization, the stress and re-victimization of survivors attempting to navigate a legal system that had low conviction rates when prosecuting rape and sexual assault cases, led to a strong surge of lobbying by organizations within the anti-rape movement.

In the mid 1970s, the National Organization of Women (NOW) in collaboration with the Women’s Anti-Rape Coalition and the National Rape Task Force advocated for legislative reform on a national level. The activism of these women and their widespread efforts proved successful in changing public policy, legislation and institutional reforms within the criminal justice system, advocacy and supportive services available for survivors. Some of the public policy and legislation changes that occurred on a national level and were adopted by most states in the early 1980s were making it criminal and illegal to rape a spouse, the adoption of “rape shield laws” which curtailed the use of a survivor’s personal history in a court room, halting the need of a witness to a rape for it to be credible, and the alteration of what consent meant legally. In 1982, through the constant engagement, advocacy and mobilization by anti-rape activists and coalitions, federal funding was provided directly to rape crisis centers by the passage of the Preventive Health & Health Services Block Grant. Many of these rape crisis centers were founded within major metropolitan areas across the nation in the 1970s by grassroots & community leaders who were often times survivors themselves. In 1974, WRC was established by five women based out of Oceanside to serve the North County San Diego area as a rape crisis center and hotline. The federal funding of rape crisis centers such as WRC helped establish, provide and expand direct supportive services to survivors such as trauma informed care and advocacy throughout the survivor’s healing process. 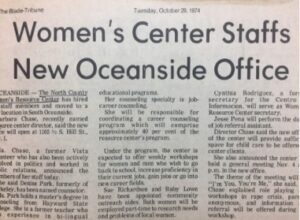 The attitude and awareness of the public in regards to sexual assault shifted drastically during this period of activism as well as with the expansion of services by rape crisis centers into community outreach and education via additional federal funding through the adoption of the Violence Against Women’s Act (VAWA) by Congress in 1994. The outreach conducted by these agencies and organizations consisted of educational workshops, self defense training, sensitivity & trauma informed training for rape prevention & crisis intervention staff. The emphasis of the educational training and outreach was to prevent rape by de-stigmatizing talks regarding dating, relationships, sex and consent. The mission of the crisis centers and agencies, that grew out of the activism of the anti-rape movement, continue to fight against social & gender norms that contribute to the persistence of rape culture and gender based violence. The current resurgence of activism against sexual assault via the #MeToo movement created by activist Tarana Burke demonstrates how survivors deserve and continue to cultivate platforms to speak on their experiences and engage in meaningful conversations that demand actions & solutions.

If you or someone you know is in need of help, please call any of the following resources: