Recognizing and Celebrating International Day of the World’s Indigenous Peoples

Recognizing and Celebrating International Day of the World’s Indigenous Peoples

This August 9th we celebrate International Day of the World’s Indigenous Peoples. On this day, many of us take a step back to acknowledge the centuries of Indigenous resilience and resistance to racism and settler-colonialism, as well as further invest ourselves as accomplices in the fight to end systemic oppressions of Indigenous peoples on local, national, and global scales.

International Day of the World’s Indigenous Peoples seeks to highlight the varied and global histories of Indigenous peoples, many of which have and continue to navigate land theft, settler-colonial violence, and disruption of civil liberties. This day was first observed on August 9th, 1995 after a United Nations resolution in December of 1994. This resolution ultimately came from the labor of the Working Group on Indigenous Peoples (WGIP), established in 1982, which provided an important and necessary platform for Indigenous peoples to partake in global conversations centering their concerns and experiences surrounding human rights. It took over twenty years and a series of reforms before the WGIP was elevated within the UN hierarchy.

“This year’s theme is COVID-19 and Indigenous peoples’ resilience. The event will feature a panel discussion on the innovative ways Indigenous peoples continue demonstrating resilience and strength in the face of the pandemic while confronting grave threats to their survival. The aim is to highlight how the preservation and promotion of Indigenous peoples’ traditional knowledge and practices can be leveraged more fully during this pandemic and build back stronger. Panelists will share good practices with the audience through an interactive webinar that focuses on building back stronger.”

More information can be found here

While having this day to commemorate the world’s Indigenous people is important, we must also continue this work year-round. We must ask ourselves how else we can be active accomplices in the liberation of Indigenous peoples. Seeking out our own education on the historical and contemporary experiences and perspectives of Indigenous peoples is one way in which we can supplement our understandings of settler-colonialism and anti-Indigenous systems. We can accomplish this through webinars and virtual information sessions, such as the virtual commemoration highlighted above, or through traditional resources such as reading texts written by Indigenous people.

One area that demands our focus is the structural settler-colonial violence that continues to harm Indigenous womxn, girls, and two-spirit peoples at disproportionately high rates—ten times the national average. The Coalition to Stop Violence Against Native Women (CSVANW) brings attention to Missing and Murdered Indigenous Womxn, Girls, and Two Spirit peoples. CSVANW began as an advocacy group local to New Mexico but has grown in its effort to mitigate and bring an end to patterns of structural violence. The CSVANW call to action asks that we involve ourselves in this fight in three different ways: invest, mobilize, and innovate. On the specifics of this call to action, check out their page on how to get involved here

We can also locate the specific tribes whose land we continue to occupy and benefit from, which we can discover through Native Land Digital’s online mapping tool

This digital map outlines informal boundaries and provides some resources on the tribes listed in the region. Engaging in land acknowledgement recognition is one way to begin unpacking the ways in which many of us benefit as settlers on historically occupied lands, and we can continue to interrogate our own positionality within different systems of privilege and oppression.

Here is an example of the Indigenous lands that make up Oceanside, California: 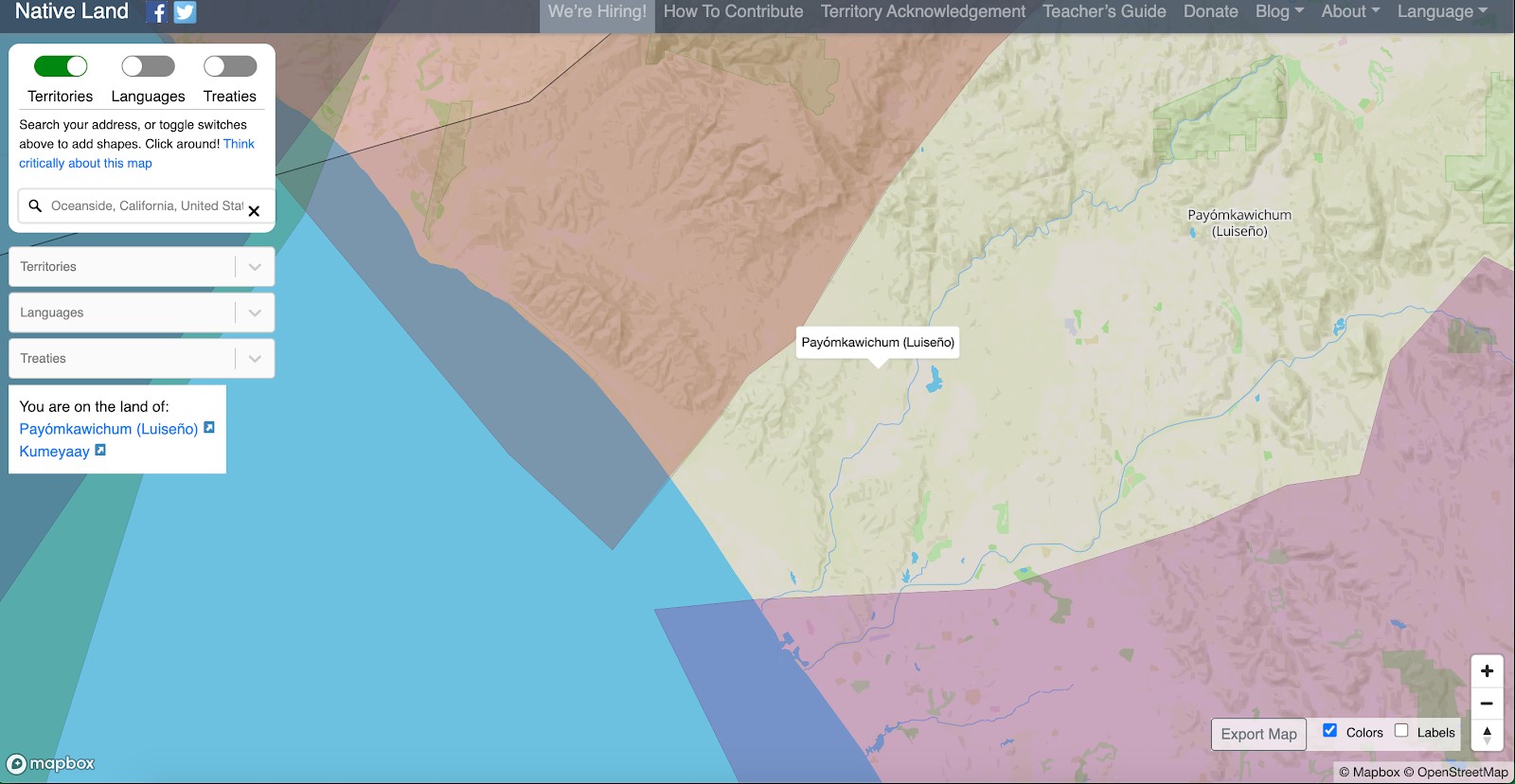 Virtual Commemoration of International Day of the World’s Indigenous Peoples