Carlsbad Rotarian at Work Day Spruces Up the WRC!

On May 27, 2019, two dozen of our friends at the Rotary Club of Carlsbad volunteered their time, energy, and resources to come to the WRC and personally paint and patch walls, touch up stairwells, plant and mulch the garden, and assist with general touch-ups in our transitional housing program facility. This project was a part of the Rotary Club’s annual “Rotarian at Work Day” community service project that was spearheaded by one of our very own volunteers, Malena Bennett, who is a member of the Carlsbad Rotary Club. She and her fellow Rotary members, Ed Scarpelli and Scott McClatchey, organized the project and gathered other members and participants to spend time with us doing valued community service. The morning was spent sharing laughs and building connections between club members, WRC staff, and the survivors who live there. 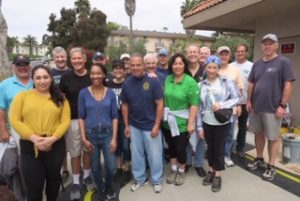 The beautification of this space that is used by the survivors we are proud to support goes a long way in upholding the WRC’s commitment to empower those affected by domestic violence. WRC Director of Residential Services, Brittney Romine, remarked, “When our residents see this space and see how much the community around us supports them, it makes them proud to live here and proud of themselves. It’s so important for us to create a space that survivors can feel supported and empowered in. Having the community — having Rotary Club — be a part of that mission, means so much to our clients and to the WRC.”

The WRC’s Transitional Housing program consists of 22 units that house survivors of domestic violence and their children for up to two years while supporting them with counseling, case management, and other services tailored to each survivor’s goals and well-being. The space that the Rotary Club renovated is used daily by the nearly 50 children and the mothers who make up the WRC transitional housing community. One client of the WRC said, “I think that it just makes the entire space more beautiful and feel so much more welcoming. My kids and I spend more time out on the patio now!”  These families came to the WRC from local San Diego emergency domestic violence shelters, including the WRC’s own Alternatives to Violence shelter program, and strive daily to create successful and thriving lives away from violence.

The WRC is proud to recognize and thank the Rotary Club of Carlsbad for their work to support and empower survivors of domestic violence in their community. Their involvement makes an impact not only on the physical building of the WRC, but also in providing friendship and encouragement to all of us in our mission to revive courage and rebuild lives.

If you too are interested in volunteering or looking for other ways to get involved with the WRC, please don’t hesitate to reach out via our contact page or by calling 760-757-3500.  For more information on the Rotary Club of Carlsbad and the work they do in the community, check out their website at www.carlsbadrotary.com. 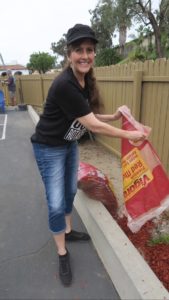 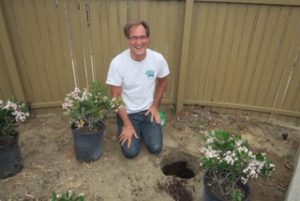