This month we have the honor of welcoming a long-cherished supporter of WRC, Katherine Mulderrig, into WRC’s Legacy Society.  Through this pledge, Katherine’s support of WRC will carry on for years to come. We are proud to recognize the continual support Katherine has provided us since first becoming involved with WRC.

Originally from the Bronx in New York, Katherine moved to Oceanside nearly 25 years ago to establish her own property management business.  Since then, she has grown to love and cherish the Oceanside community, which is palpable in her philanthropy. Katherine has been a staunch supporter of WRC for more than 20 years after being invited to get involved with WRC by one of our founders, Colleen O’Harra.  She owes the impact she’s made throughout her life to the women she’s met throughout her journey with Friends of WRC and Soroptimists International of Oceanside-Carlsbad who “encouraged [her] and made [her] want to continue to work to make this community even better.” 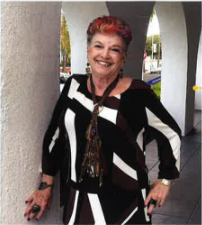 Through joining WRC’s Legacy Society, Katherine ensures that her impact on the lives of survivors and their children will be felt for years to come. Katherine’s giving is based on her desire to support women and children who are in need and was inspired by WRC’s mission to “Revive Courage & Rebuild Lives”.  In conversation with Katherine, she stated that her goal with her philanthropy is to “see that all children that [she] could help were helped so they may have an equal opportunity.” Katherine says that her hope in pledging to WRC’s Legacy Society is “to be able to continue to support the WRC and the women and children who go there both financially and in spirit to help have the resources they need to change their lives.”

Katherine’s community involvement goes beyond WRC’s doors and has worked to support all of Oceanside with a variety of initiatives, projects, and foundations she supports including the Oceanside Museum of Art, the Oceanside Charitable Foundation, and local holiday giving projects for low-income families.  In her day-to-day life, she is kept busy with her work in the Oceanside community and her cherished 11 year-old dog, Shanti.

If you would like to learn more about joining WRC’s Legacy Society and the impact that you can make alongside supporters like Katherine, please reach out to WRC Director of Development, Lauren-Jane Stephenson at lj.stephenson@wrcsd.org

Friends of WRC, too, makes a tremendous impact on the lives of the children in WRC’s programs.  You can find more information about Friends of WRC at their webpage linked below!